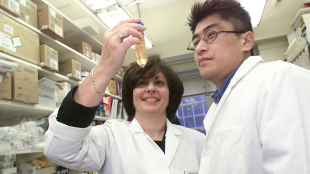 WIKIMEDIA, NATIONAL CANCER INSTITUTENo longer is the loss of promising female scientists outpacing that of bright young male researchers. But what at first blush sounds like good news may be a function of the fact that fewer men are going on to earn PhDs in science, technology, engineering, and mathematics (STEM) fields, according to a new study. A paper published in Frontiers in Psychology this week (February 17) indicates that the gap that existed in the 1970s—when men with undergraduate STEM degrees in science were about 1.7 times more likely than similarly qualified women to go on to get PhDs in those fields—had closed by the 1990s.

And that trend continues today, wrote the authors of the study. “The major finding of the study is the ‘leakage’ or loss of men,” San Francisco State University Provost Sue Rosser told Inside Higher Ed. “It’s not so much that women...

The authors noted that though the gender gap in young scientists going on to get PhDs may have closed, there are still several gender-based issues at play in STEM fields. The number of women in assistant professor positions, for example, has recently dropped. Study coauthor David Miller, a doctoral student in psychology at Northwestern University, told Inside Higher Ed that the findings should not be used to discourage programs at several universities that steer promising women to advanced degrees and careers in science and technology. Those programs, he said, are making real progress in encouraging women who may have otherwise left STEM.