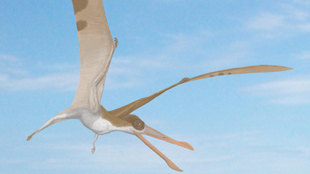 An example of an Early Cretaceous Brazilian pterosaurWIKIMEDIA COMMONS, SMOKEYBJB

A new pterosaur fossil discovered in Chinasupports global distribution of pterosaurs, a type of flying reptile that soared over dinosaurs 210 to 65 million years ago. The new fossil, named Guidraco venator for the Chinese and Latin for “ghost dragon hunter,” was discovered in the Jiufotang Formation, an Early Cretaceous geological formation in northeast China. Despite this, G. venator appears most closely related to Ludodactylus sibbicki, a species identified in Brazil in 2003, reported Wired Science.

The study’s authors suggest that G. venator hunted for fish, based on its long, needle-like teeth and nearby fossilized feces containing fish bones. Some experts disagree with this conclusion, arguing instead that G. venator were more likely scavengers like L. sibbicki is believed to have been.

“Just imagine yourself as this creature. How would you catch living fish with such needles?...

“We can [now] hope to find them anywhere in the world where Early Cretaceous strata crop out,” David Martill, a paleontologist at the University of Portsmouth, who did not participate in the research, told Wired.