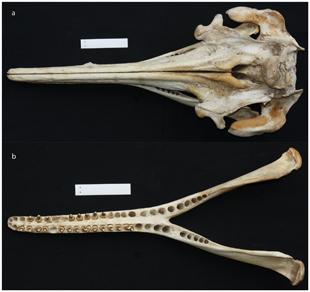 Cranium and mandible of I. araguaiaensisPLOS ONE, HRBEK ET AL. For nearly a century, scientists were only aware of two species of river dolphins residing in the freshwater network that includes the basins of the Amazon River and the Araguaia and Tocantins Rivers in South America, Inia geoffrensis and I. boliviensis. Now, researchers from the Federal University of Amazonas in Brazil have found DNA evidence to suggest there is a third species, separated from the other two species by rapids in the Araguaia River, I. araguaiaensis. Their finding was presented last week (January 22) in PLOS One.

“It was something that was very unexpected,” coauthor Tomas Hrbek told BBC News. “It is an area where people see them all the time. They are a large mammal. The thing is nobody really looked. It is very exciting.”

The researchers took skin samples from 44 I....

“The genetic lines of evidence are very strong,” Eric Archer of the National Oceanic and Atmospheric Administration’s Southwest Fisheries Science Center in San Diego, California, who was not involved in the research, told ScienceNOW. Archer added that more morphological measurements and studying the animals’ behavior might reveal more differences between the species.

The new species may face even greater conservation challenges than the others. “Based on census data there are probably only a thousand individuals, which is a very small population size,” Hrbek told ScienceNOW. “We looked at genetic diversity and it’s quite low compared to the other species. It’s not a very rosy picture.”