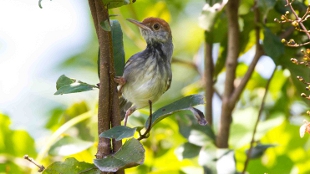 A female Cambodian tailorbirdASHISH JOHN/WCSIn and around Cambodia’s capital Phnom Penh lives an unassuming little bird, recently recognized by science as the Cambodian tailorbird (Orthotomus chaktomuk). First seen in 2009 during routine checks for avian flu, according to BBC News, the species is new to science, and its discovery is reported in the Oriental Bird Club journal.

The new tailorbird belongs to the warbler family. Tailorbirds get their name from how the birds build nest by weaving leaves together. Though it looks similar to other tailorbirds, O. chaktomuk is unique, researchers say: its plumage, song, and genes all point to it being a distinct species.

Finding a new species in an urban environment is rare, but the scientists who formally named it think the bird lives in the dense scrubland of the Mekong river floodplain along the outskirts of the city. “The modern discovery of...

Unfortunately, the bird’s suspected habitat is small and growing smaller, and the researchers recommended the new species be listed as “Near Threatened” on the International Union for Conservation of Nature's Red List.