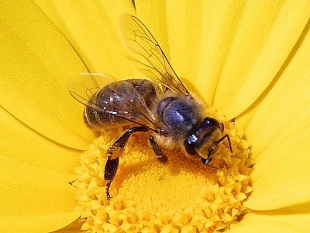 WIKIMEDIA, JON SULLIVANUS Department of Agriculture researchers identified tobacco ringspot virus (TRSV), a blight-causing pathogen that wreaks havoc on soy crops, in a routine screen of commercial honeybees, according to a study published today (January 21) in mBio. The virus appeared to infect nearly every tissue of its bee hosts, excluding the eyes, and to spread between the insects via mites that feed on bee hemolymph.

Identifying the cause of honeybee population declines has become a top priority, as the insects are critical to the multibillion dollar agricultural industry. RNA viruses like TRSV are particularly concerning because of their high mutation rates and ability to subvert the host’s immune response. “Because of their genetic diversity, we see a lot of host jumping,” lead author Yan Ping Chen, a bee pathologist at the USDA Agricultural Research Service laboratory in Maryland, told the Los Angeles Times. How frequently the...

The virus’s direct role in bee declines is also unclear at this point, though the authors point out in their paper that “the increasing prevalence of TRSV in conjunction with other bee viruses from spring toward winter in infected colonies was associated with gradual decline of host populations and winter colony collapse, suggesting the negative impact of the virus on colony survival.”

“I’d be hesitant to proclaim that this virus is the cause of colony collapse, but it certainly shows the degree of our lack of understanding of the complexity of bee pathogen interactions,” Randy Oliver, a biologist and beekeeper who was not involved in the study, told the LA Times.