The Bourbon virus, a newly discovered tick-borne pathogen named after the county in eastern Kansas where a patient infected with the strain died in the late spring of 2014, is the first member of the thogotovirus family known to cause illness in the United States, according to a paper released last week (February 20) in Emerging Infectious Diseases.

Thogotoviruses are known to be spread by ticks and mosquitoes in parts of Europe, Asia, and Africa, although the Bourbon virus case is only the eighth demonstrated instance of human infection with such a virus. The patient, a man over the age of 50, had suffered multiple tick bites prior to developing a fever, fatigue, aches, nausea, vomiting, and low white blood cell and platelet counts. He was given doxycycline, a common treatment for tick-borne illnesses, but he tested negative for previously known diseases carried by ticks and died of multiorgan failure 11 days after the onset of his symptoms.

Researchers from the US Centers for Disease Control and Prevention (CDC), the University of Kansas, and the Kansas Department of Health and Environment examined the patient’s blood and found an unidentified virus. The scientists then used advanced molecular detection  (AMD) to sequence the viral genome, confirming that it was a previously unknown disease pathogen.

“We have an unprecedented opportunity to help identify the public health burden of previously unknown and undetectable agents using AMD technologies; it’s an exciting time to be involved in this research,” said study coauthor Amy Lambert of the CDC in a statement.

At this time, the only known prevention strategy for Bourbon virus infection is to avoid tick bites, and there is currently no treatment. 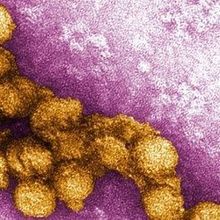