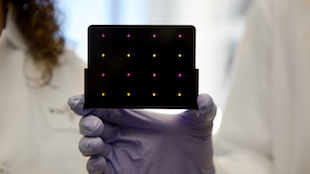 The paper-based Zika test could make it easier to diagnose infection in the field.WYSS INSTITUTE AT HARVARD UNIVERSITYScientists have developed a cheap, rapid, paper-based diagnostic test for Zika virus. The test is capable of discriminating between Zika and related viruses like dengue, and can detect Zika even at low levels in plasma from infected monkeys, researchers from MIT and their colleagues reported today (May 9) in Cell.

Testing takes only two to three hours, which “is much faster and cheaper than the PCR tests used now,” study coauthor James Collins, a bioengineer at MIT, told The New York Times. “We’re talking with groups in Colombia and Brazil about testing it in the field.”

The test consists of a series of dots on a piece of paper that turn from yellow to purple to signify infection. As MIT Technology Review reported, an RNA sensor spurs production of...

Collins and colleagues successfully used their test to detect the virus in blood from an infected macaque monkey, but have not yet evaluated its performance on human samples. Using CRISPR/Cas9 gene-editing, the test is capable of distinguishing between different strains of Zika, according to the researchers. The Cas9 enzyme selectively targets and cleaves DNA synthesized from viral RNA only if a specific sequence is present, rendering it undetectable by the RNA sensor. If the sequence is not present, the DNA is not cleaved and the virus will be detected.

Each test costs less than $1, and can be stored at room temperature for up to a year, the researchers reported in their paper.