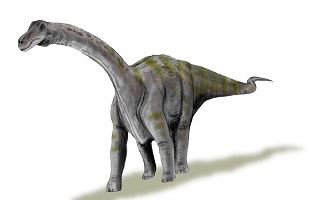 Babies of the largest dinosaur species ever to have walked the Earth, a Cretaceous sauropod called Rapetosaurus krausei, were born with adult-like limb proportions, according to a study published today (April 22) in Science. The findings suggest that these precocious dinosaurs were independent from their parents at a younger age than their late-blooming relatives.

“We took a series of detailed measurements of the baby and compared the proportions of things like mid-shaft circumference and bone length to a number of other, older Rapetosaurus skeletons in our collection,” study coauthor Kristina Curry Rogers of Macalester College, Minnesota, told ABC. “Despite massive changes in body size, the proportions stayed the same.”

The researchers analyzed a newly discovered fossil of an infant R. krausei that likely died of starvation between the age of 39 and 77 days. At its birth, the team estimated, it weighed roughly...

Using bone histology and X-ray computer tomography, the researchers measured the compactness of the infant’s bones and estimated that the limbs had remained in much the same structure and proportion throughout its life—a finding suggesting that R. krausei “required a less significant parental investment after hatching or birth,” Curry Rogers told ABC.

The findings make sense given the adults’ enormous size, the University of Maryland’s Thomas Holtz, who was not involved in the study, told Science. “It’s always seemed a bit weird to think of titanosaurs having much in the way of parental care,” he said.