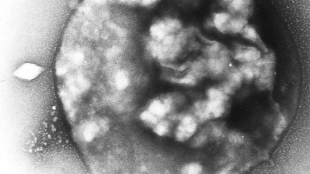 WIKIMEDIA, XIAOYU XIANGTransposons are stretches of DNA that can hop to different sites in the genome and are commonly found in many types of organisms. In a study published in BMC Biology this month (May 19), researchers described a new type of transposon-like element in bacteria and archaea that encodes a Cas enzyme—well appreciated for its role in the CRISPR/Cas adaptive immune system in prokaryotes—which it in turn requires for integrating into a new genomic home.

As an immune response, CRISPR/Cas works by targeting and chopping up foreign DNA, and labs around the globe have adapted it for genomic editing purposes using the enzyme Cas9. As part of the present study, researchers from Pasteur Institute in Paris and the National Center for Biotechnology Information in Bethesda, Maryland, compared the genomes of several archaeal and bacterial taxa and identified related Cas1 endonucleases.

The regions of the genome encoding these Cas1...

The team proposed that the Casposons help enable the CRISPR/Cas immune system. And the phylogeny of Cas1 “is compatible with the possibility that the Cas1 family of endonucleases emerged in the context of mobile elements and only later was adapted for cellular defense,” the authors added.

Casposons are now the second family of transposons—aside from a group present in eukaryotic genomes—known to be self-synthesizing, meaning that they code for their own DNA polymerase involved in replication.