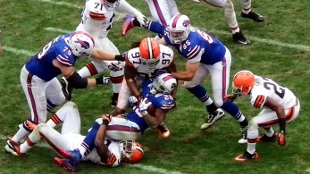 FLICKR, DROSTThe conclusion to the publicized legal battle between the National Football League (NFL) and more than 4,500 former players may finally have been reached: the league will pay a settlement of $765 million, according to a statement made today (August 29) by Senior US District Judge Anita Brody in Philadelphia. Most of that money will go to retired players who have severe cognitive impairment, dementia, or Alzheimer’s or Lou Gehrig’s disease—with $75 million for medical exams for retired players, and $10 million for research and education, reported NBC News.

How the money is divvied up among the plaintiffs will be determined by doctors and court administrators, and Judge Brody must still approve the settlement before it is final.

“This is a historic agreement, one that will make sure that former NFL players who need and deserve compensation will receive it, and that will promote safety for players...

The lawsuit, which was brought against the NFL last summer, alleged that neurological problems suffered by the plaintiffs resulted from repeated head injuries they endured on the football field, and that the league had glorified the violence while failing to adequately warn the players about the risks. The plaintiffs went so far as to accuse the NFL of hiding evidence that concussions can cause permanent brain damage and possibly lead to depression and increased suicide risk.

The NFL has made several recent efforts to protect its players, including requiring independent medical teams to evaluate injured players before they can return to the game. Meanwhile, research continues on the mechanism underlying the neurodegeneration seen in victims of repeated head injury.

“It’s been a struggle to get to this point, but today . . . I am very proud that the NFL has decided to stand up for all the former players who are suffering from brain injuries,” former NFL fullback Kevin Turner, a plaintiff in the suit who suffers from ALS, said at a teleconference following the announcement, according to USA Today.