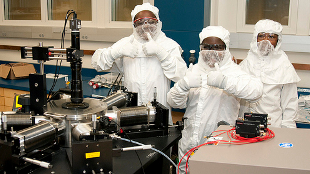 FLICKR, ADELPHI LAB CENTERTraining minority scientists, improving mentoring, and adjusting university enrollment processes are among the newly funded efforts to increase the diversity of the biomedical workforce. Armed with $31 million from the National Institutes of Health (NIH) Common Fund, a dozen university teams will lead the way in encouraging young students of all racial and ethnic backgrounds to enter a career in scientific research, the agency announced this week (October 22).

“NIH has made a commitment to understand why there is a dearth of diversity in our workforce and will use this knowledge to create programs that help our young talent from all backgrounds choose careers in biomedical sciences and succeed,” Hannah Valantine, the NIH’s chief officer for scientific workforce diversity, wrote at NIH Deputy Director for Extramural Research Sally Rockey’s Rock Talk blog. “The new NIH diversity programs announced today aim to do just that, by...

After a 2011 study suggested that African American scientists are less likely than their white colleagues to receive NIH funding, the agency convened a working group to evaluate the situation. In June 2012 report, the group “highlighted that the biomedical workforce lacks diversity,” Valantine wrote, and that the problem can be attributed, in part, “to the small pool of students and trainees from underrepresented groups who successfully traverse the pipeline and make it out the other end into research careers.”

The new awards were granted to 12 universities known for training minority students and are targeted toward improving the education experience, including more hands-on science instruction to get undergrads hooked on the field. “We believe that recruiting of individuals into careers in science is often predicated upon an opportunity to actually carry out scientific research in a meaningful way as an undergraduate,” NIH Director Francis Collins told The Chronicle for Higher Education. “Now comes the hard work of implementing and rigorously assessing to see what works best in which setting.”