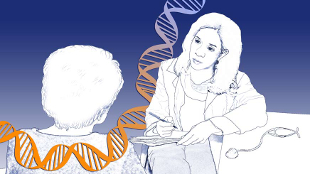 JANE ADES, NHGRIPresident Barack Obama’s vision for a Precision Medicine Initiative, which he voiced in this year’s State of the Union address, is inching closer to realization. The National Institutes of Health (NIH) yesterday (March 30) announced that it has formed a panel of precision medicine experts and researchers versed in large clinical trials to take the first steps toward engendering the widespread public participation that a large-scale personalized medicine research effort will require.

The “Working Group of the Advisory Committee to the NIH Director,” as it will be called, will gather public comment, define the aims of such a large study, and help design the study. Obama called for $215 million to fund the initiative in his FY2016 budget proposal. If OKed by Congress, about $130 million of this would be slated for the recruitment and management of a group of 1 million volunteers who would share...

The working group, tasked with delivering a preliminary report in September, includes Richard Lifton, a Yale geneticist, Kathy Hudson, NIH’s Deputy Director of Science, Outreach, and Policy, and several other researchers from the private, public, and academic sectors.