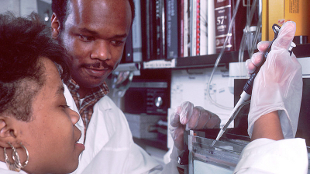 WIKIMEDIA, JOHN CRAWFORDThe National Institutes of Health (NIH) may not be biased against black scientists after all, according to a new analysis of the agency’s funding practices published yesterday (January 31) in the Journal of Informetrics, which found that African American applicants are funded at a similar rate to white researchers, when controlling for institution and research history.

After 2011 study, coauthored by former NIH Deputy Director and African American scientist Raynard Kington, pointed to the possibility of racial bias within the country’s top biomedical funding agency, the scientific community was abuzz with the news: 29 percent of R01 grant proposals submitted by white scientists were funded, but only 16 percent of applications from black applicants.

“The situation is not acceptable,” NIH Director Francis Collins told Nature. “It indicates that we have not only failed to recruit the best and brightest minds from all the groups that...

In response to the study, Collins launched a $500 million, 10-year program to support young minorities in science. The agency is also planning a pilot project to review grant proposals anonymously, to see if that will reduce the apparent racial bias in the process.

But perhaps the concern is unwarranted, as researchers have questioned the findings of the 2011 study, ScienceInsider reported. To get to the root of the matter, Virginia Tech biomedical engineer Ge Wang and his colleagues examined randomly selected black and white faculty members and at top-ranked US medical schools. Controlling for institution the researchers found that black researchers were, on average, less productive, according to a measure that accounted for publication record and citation count, among other factors. Specifically looking at NIH funding for 22 of the researchers, controlling for this difference in productivity eliminated the racial bias seen in the 2011 study: black applicants received as much, if not more, agency funding.

However, Donna Ginther of the University of Kansas, Lawrence, a coauthor on the 2011 study, is not convinced. While she notes that accounting for productivity reduces the difference in the funding success rates of black and white scientists, “there's still a significant gap,” she told ScienceInsider.