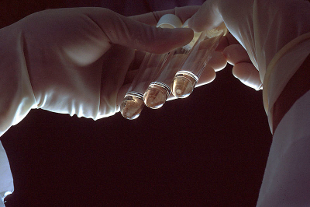 WIKIMEDIA, NCI, JOHN CRAWFORDLately the scientific community has been talking about the omnipresent problem of irreproducibility—the failure of researchers to replicate results in the published literature. This week in Nature, National Institutes of Health (NIH) Director Francis Collins and Principal Deputy Director Lawrence Tabak weighed in on this discussion, noting several ways in which the agency hopes to fix the problem.

“Reproducibility is potentially a problem in all scientific disciplines,” the duo wrote. “[T]he checks and balances that once ensured scientific fidelity have been hobbled.”

Collins and Tabak cited poor experimental design and a scientific culture that overvalues provocative statements and high-impact publications as contributors to the problem. Misconduct, they noted, is unlikely to be a main driver. “[F]raudulent papers are vastly outnumbered by the hundreds of thousands published each year in good faith,” they wrote.

Among the suggested solutions is better training for young investigators on...

“As a funding agency, the NIH is deeply concerned about this problem,” they wrote, adding that “reproducibility is not a problem that the NIH can tackle alone. Consequently, we are reaching out broadly to the research community, scientific publishers, universities, industry, professional organizations, patient-advocacy groups and other stakeholders to take the steps necessary to reset the self-corrective process of scientific inquiry.”