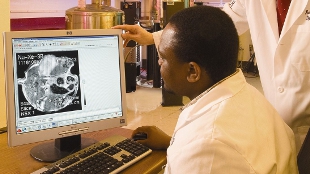 IMAGE COURTESY OF THE NIH

African American researchers applying for independent investigator grants from the National Institutes of Health (NIH) are 10 times less likely to win them than their white counterparts, and the agency must take steps to correct the imbalance, according to an NIH advisory committee that submitted a report to the agency's director.

The panel, chaired by two senior African American research administrators, met with NIH director Francis Collins on June 14, and urged bold and continuous action to combat the bias revealed by a study published last year in Science. The initial steps should include data gathering by social and behavioral scientists and establishing a new "chief diversity officer" position, according to the report. The report also suggests that the NIH start mentorship networks that can help young minority scientists early on in their academic careers and floats the idea of scrubbing proposals of applicants'...

The NIH seems committed to tackling the problem of racial bias in the granting process. "This is a very serious issue," Collins said at the meeting with the advisory panel. "To have this circumstance continue … is simply unacceptable."