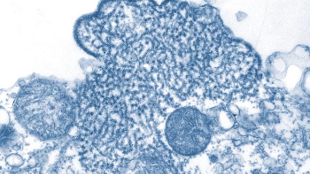 A transmission electron micrograph of Nipah virions isolated from a patient's cerebrospinal fluidWIKIMEDIA, CDCThe Nipah virus phosphoprotein, P, plays a key role in viral replication. Therefore,  understanding its structure may shed light on ways to disrupt the viral life cycle. “If you can prevent the virus from making more RNA, then it can’t replicate, which is a good strategy for developing antiviral medications,” Jessica Bruhn, a graduate student in Erica Ollmann Saphire’s lab at Scripps Research Institute in La Jolla, California, said in a press release.

With this in mind, Bruhn, Saphire, and colleagues subjected the protein to X-ray crystallography, observing diffraction patterns that revealed its shape: “a long, parallel, tetrameric, coiled coil with a small, α-helical cap structure,” according the paper published in the December issue of the Journal of Virology. Interestingly, this shape is highly similar to the P protein structure of the sendai,...

“It was surprising to us that this structure is so similar to those from measles and mumps viruses, even though they are only 5 [percent] to 26 percent identical in sequence,” Bruhn said in the release. The results suggest “a common requirement for scaffolding or spatial organization of the functions of P in the virus life cycle,” the authors wrote in the paper.

The team is now focusing on what makes the Nipah virus so deadly. Having first emerged in the late 1990s, the virus has demonstrated lethality rates of 40 percent to 100 percent in humans. It is currently found in Southeast Asia, particularly Malaysia, Bangladesh, and India. Collaborating with the Centers for Disease Control and Prevention, Saphire’s group plans to more closely examine the role of the P protein in infection, and understand why previous reports have suggested the protein was a trimer, with just three components, instead of four.