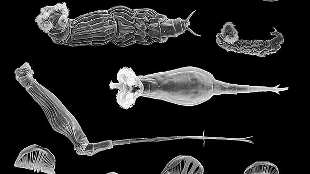 Scanning electron micrograph of bdelloid rotifers.Wikimedia, Diego FontanetoA microscopic rotifer called a bdelloid, often studied as an interesting exemplar of asexual reproduction, has taken up to 10 percent of its genome from an estimated 500 other species in order to maintain genetic diversity, according to a new study published last week (November 15) in PLOS Genetics.

Animals that don’t swap genetic information through sex are often thought to eventually go extinct because their lack of genetic diversity prevents them from adapting to the changing environment and new niche opportunities. As a result, John Maynard Smith called bdelloids an “evolutionary scandal,” reported ScienceNOW. Despite this, these organisms, which live in aquatic environments, such as puddles, sewage treatment plants, or dew drops on soil, have lived for an estimated 80 million years.

Earlier studies have found that bdelloids have some foreign genetic material, but the extent of...

"We have a joke in the lab that every time you investigate these animals . . . they come out with something weird," Tunnacliffe told ScienceNOW. "It's like they're here to keep us entertained and surprised."