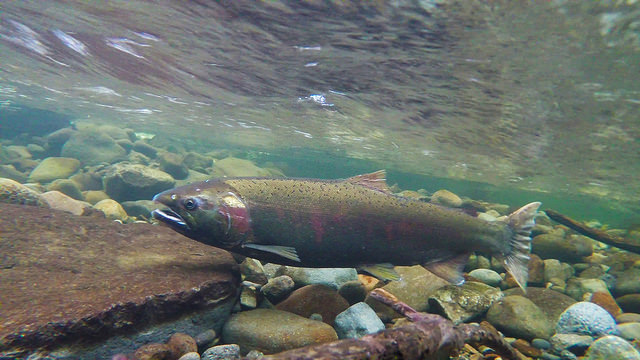 A coho salmon FLICKR, BUREAU OF LAND MANAGEMENTUse of the organophosphate pesticides chlorpyrifos, diazinon, and malathion should be restricted to protect marine life, an extensive review by the National Oceanic and Atmospheric Administration’s National Marine Fisheries Service (NOAA Fisheries) concludes. The 3,400-page report was made public last week by the advocacy organization Earthjustice, E&E News reports.

“The best available science clearly shows these pesticides are a major threat to endangered salmon and to our orca whales, which need salmon to survive,” Patti Goldman, managing attorney at Earthjustice, tells E&E News. “These pesticides are bad for people every way they are exposed to it and toxic to salmon.”

The Associated Press notes that environmentalists and commercial fishers have fought in court for decades for more government scrutiny of organophosphates, a class of pesticides derived from a chemical weapon. The new report was completed just prior to a court-imposed end-of-year...

“The denial of a requested extension of time to complete the opinion resulted in a document that has the potential to create exaggerated and unfounded concerns regarding threatened and endangered species and have a negative impact on farmers as well as public health protection,” Jay Vroom, CEO of industry trade group CropLife America, says in a statement (via E&E News). President Donald Trump’s administration had earlier requested a two-year extension of the 2017 deadline for the report.

But Glen Spain of the Pacific Coast Federation of Fishermen's Associations tells E&E News that “Salmon have been waiting four decades for relief from toxic pesticides in many of our rivers. . . . The agencies should do their job.”