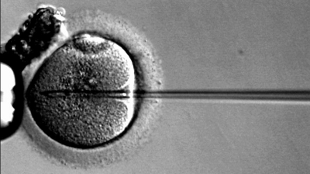 Sperm being injected into an oocyteWIKIMEDIA, COURTESY: RWJMS IVF LABORATORYThe researcher who pioneered human in vitro fertilization (IVF) died yesterday (April 10) after a long battle with illness. He was 87. His work, which led to the birth of more than 5 million babies, won him the 2012 Nobel Prize in Physiology or Medicine.

“I have always regarded Robert Edwards as like a grandfather to me,” Louise Brown, the world’s first ever infant born through IVF, told the BBC. “I am glad that he lived long enough to be recognized with a Nobel Prize for his work, and his legacy will live on with all the IVF work being carried out throughout the world.”

Edwards created a human blastocyst, the ball of cells that forms early in the development of an embryo, outside the womb for the first time in his Cambridge University laboratory in 1968. Ten...

In the 24 hours since his death, tributes to Edwards’s work have been pouring in. Mike Macnamee, chief executive of Bourn Hall, an IVF clinic founded by Edwards with his fellow IVF pioneer Patrick Steptoe, told the BBC that Edwards was “one of our greatest scientists.”

Barry Bavister, a retired reproductive biologist who worked with Edwards told The New York Times that though his research was controversial at the time, the scientist “believed with all his heart that it was the right thing to do,” hoping only to aid infertile women that wanted to conceive.

But Edwards’s contributions to science were not universally praised. The Roman Catholic Church, for example, derided the Nobel committee for awarding Edwards the 2012 prize, arguing that conception should occur only through intercourse. Edwards “bore a moral responsibility for all subsequent developments in assisted reproduction technology and for all abuses made possible by IVF,” warned the Vatican when Edwards was awarded his Nobel.

Edwards is survived by his wife, Ruth Edwards, along with their 5 daughters and 12 grandchildren.