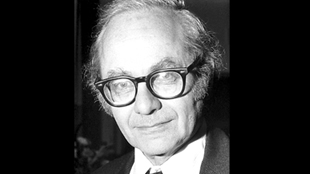 NOBEL FOUNDATIONDavid Hubel, who shared half the 1981 Nobel Prize in Physiology or Medicine with his collaborator Torsten Wiesel for their work on visual information processing, died September 22 of kidney failure. He was 87.

Hubel’s work focused on understanding how the neurons of the retina communicate visual information to the brain. When he and his collaborator Torsten Wiesel began to examine the visual system in the 1950s, it was believed that the eyes projected visual images directly onto the cortex, as a movie is projected onto a screen. But Hubel and Wiesel demonstrated that visual images perceived by the retina are first transformed into code and then transmitted to the brain, which interprets that code to recreate the images. For this discovery and for later demonstrating that an early critical period exists for establishing retinal communication with the brain, Hubel and Wiesel became Nobel Laureates in 1981.

Hubel was born in Canada in 1926. His father was a chemical engineer, and he grew up fascinated by both chemistry and electronics. After earning degrees in both physics and mathematics from McGill University in Montreal, Hubel enrolled in medical school at McGill, though he had never taken a biology class. He spent his summers at the Montreal Neurological Institute, where he first took an interest in the nervous system. After medical school and residency, he ventured to the U.S. In place of the intended neurology training at Johns Hopkins in Baltimore, Hubel was drafted as a doctor and assigned to the neuropsychiatry division of the Walter Reed Army Institute of Research in nearby Silver Spring, where he first began to study the visual cortex.

In 1958, Hubel moved to Johns Hopkins and began a decades-long collaboration with Wiesel. They both moved to Harvard Medical School in Boston a year later. At Harvard, Hubel maintained a lab in the department of neurobiology, even as an emeritus professor.

“There was always this tremendous excitement about finding out something new,” Hubel and Wiesel’s former graduate student Carla Shatz told The Scientist in 2011. Shatz, who is now a professor at Stanford University, was a member of the pair’s lab when they did the work that garnered their presitigious prize.

“Together this body of work stands as one of the great biological achievements of the 20th century. But it was not simply their work but also the style that was so great: a combination of insight, creativity, beauty and modesty,” Columbia University neuroscientist Eric R. Kandel wrote, reviewing Hubel and Wiesel’s work in The Journal of Physiology in 2009.

Hubel is survived by three children and four grandchildren.