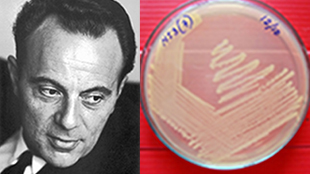 LEFT: NOBEL PRIZE PORTRAIT; RIGHT: WIKIMEDIA, JOYDEEPBacterial geneticist François Jacob died in Paris last week (April 19) at age 92. Jacob was famous for his work with Jacques Monod and André Lwoff on gene regulation, which won the trio the Nobel Prize in Physiology or Medicine in 1965.

“If I find myself here today, sharing with André Lwoff and Jacques Monod this very great honor which is being bestowed upon us, it is undoubtedly because, when I entered research in 1950, I was fortunate enough to arrive at the right place at the right time,” Jacob said in the opening of his Nobel acceptance speech.

Jacob was born in France and began his career in cell biology after fighting in World War II as part of the Free French forces, the Los Angeles Times reported. Prior to the war, he had planned on becoming a surgeon, but...

There he participated in characterizing bacteriophages, viruses that seed DNA into bacterial genomes, where they can lie dormant for long periods before reactivating and killing the host cell. He also confirmed the existence and function of mRNA.

But he is most well known for his work on the Escherichia coli lac operon, which allows that bacterium to control how much lactose-digesting enzyme it makes by taking into account the amounts of lactose and glucose available. Through this work, Jacob and colleagues demonstrated how genes in a cell are turned off and on.

Jacob was memorialized earlier this week (April 24) in a state funeral service in Paris.