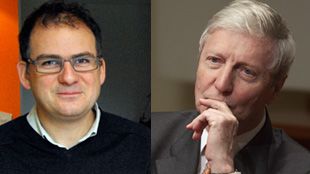 A scientist is accusing French immunologist Jules Hoffmann, who was awarded the 2011 Nobel Prize for Physiology or Medicine along with Bruce Beutler for the discovery in Drosophila that the Toll gene regulates the immune response against bacteria and fungi, of not doing the research that led to the prize. The accusation comes from none other than the first author of the 1996 Cell paper where the finding was reported, Bruno Lemaitre.

Lemaitre, who worked as a research associate in Hoffmann’s lab at the at the National Centre for Scientific Research (CNRS) in Strasbourg, France, from 1992 to 1998, claims that for most of the 1990s, he was the only researcher working on Toll and that Hoffmann did not express interest and was for the most part not aware of his research.

“Jules never provided any ideas for...

Although Hoffmann refuses to address Lemaitre’s accusations on account that it “would not be elegant,” he told ScienceInsider last week that he “cannot feel any guilt at all," and that Lemaitre and others involved in the work received their due credit in the Nobel lecture he gave recently in Stockholm.