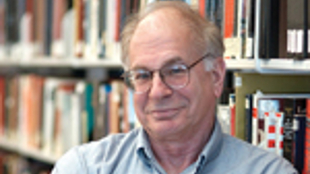 Daniel Kahneman, Image: NIHPrinceton University psychologist Daniel Kahneman, who won the 2002 Nobel Prize in Economics for his discipline-bridging research on the psychology of financial decision making, has issued a stark warning to fellow psychologists who study a phenomenon called "social priming," when subtle cues unconsciously affect behavior or thoughts. "Your field is now the poster child for doubts about the integrity of psychological research," Kahneman wrote in a September 26th email obtained by Nature. "My reason for writing this letter is that I see a train wreck looming."

Kahneman discusses the state of social priming research, and highlights the general skepticism fed by failed attempts to replicate key studies in the field. He warns that graduate students studying social priming may experience difficulties securing future employment due to the field's tarnished image. Kahneman sent the email to several colleagues he describes as "students of social priming."

He suggests that the community of psychologists researching social priming establish a replication "daisy chain" linking a handful of substantial labs. Each lab would reproduce one significant social priming experiment and publish the results of the replicate study. This, Kahneman wrote, will help the field obtain "the big prize of restored credibility."

"Kahneman is a hard man to ignore," social psychologist Brian Nosek of the University of Virginia in Charlottesville told Nature. "I suspect that everybody who got a message from him read it immediately."

In related news, social psychologist Diederik Stapel is being investigated by the Dutch Public Prosecution Service and Holland's Fiscal Information and Investigation Service, according to media reports cited by ScienceInsider. Last year, Stapel was accused of fabricating the results of several high-profile social psychology studies, leading to 25 retractions from the scientific literature. The current investigation of Stapel involves allegations that he misspent grant money intended for research, and has led investigators to confiscate the psychologist’s laptop, cell phone, and financial records.