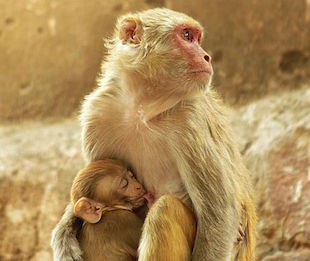 Rhesus macaquesWIKIMEDIA, ARINDAM ADITYAScientists have developed a nonhuman primate model of Zika virus infection to better understand its course in humans, especially in pregnant women. David O’Connor of the University of Wisconsin-Madison and colleagues injected eight rhesus macaques—two of them pregnant—with the Asian strain of the virus currently circulating in South and Central America. The non-pregnant and pregnant monkeys were still infected 21 days and up to 57 days later, respectively, and all animals were immune to reinfection 10 weeks post-injection, the researchers reported today (June 28) in Nature Communications. Prior to publication, the team was posting its data online in real time.

“This study in a nonhuman primate provides an important contribution to our understanding of the course of Zika virus infection in primates,” Amelia Pinto of Saint Louis University, Missouri, who was not involved in the work, said in a statement sent to reporters. However,...

In previous, unpublished work, O’Connor and colleagues infected two pregnant macaques with Zika during the animals’ third trimesters, sacrificed the fetuses at full term, and performed necropsies on them. The team did not observe evidence of microcephaly in the baby monkeys, but is still analyzing the aborted animals’ tissues. For the present study, the researchers infected pregnant monkeys during their first trimesters of pregnancy, as well as non-pregnant rhesus macaques (three males and three females).

With monkeys, “you can do experiments much more comprehensively than only with imaging in humans,” O’Connor said yesterday (June 27) during a press briefing.

The team detected the virus in the animals’ blood, urine, and saliva for up to 17 days post-injection. The virus was also found, for less than a week, in cerebrospinal fluid and vaginal fluid, the researchers wrote. None of the infected monkeys showed symptoms of Zika infection.

It’s unclear why the pregnant monkeys remained infected for longer than the non-pregnant ones. “Our leading hypothesis is it indicates the fetus is infected and is shedding virus back into mother’s bloodstream,” O’Connor told reporters during the briefing.