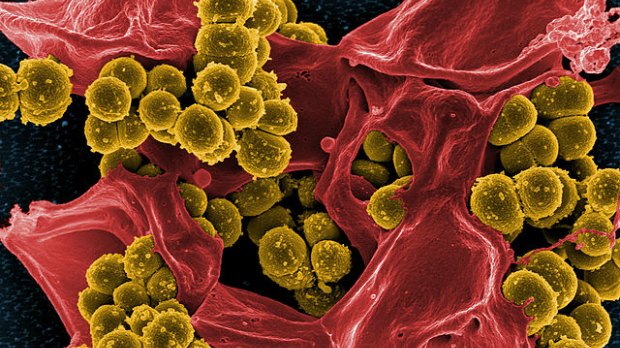 WIKIPEDIA, NIAIDHumans harboring a type of Staphylococcus bacterium—S. lugdunensis—in their noses have a lower abundance of S. aureus, the kind that can cause nasty infections. The reason, researchers reported today (July 27) in Nature, is that S. lugdunensis produces a bactericidal compound that wards off the pathogenic bug and shows promise as a therapeutic.

“That’s a big deal, since preventing S. aureus from growing in the nostril is an important challenge in preventing staph infections,” Michael Fischbach of the University of California, San Francisco, who was not involved in the study told Scientific American.

The research team, led by Andreas Peschel at the University of Tübingen, Germany, looked for snot bacteria that could inhibit the growth of S. aureus, which led the group to S. lugdunensis. The scientists then discovered S. lugdunensis’s weapon, an antibiotic they dubbed lugdunin. Experiments in mice...

“We’ve found a new concept of finding antibiotics,” Peschel said this week at the EuroScience Open Forum, according to Science. “We have preliminary evidence at least in the nose that there is a rich source of many others, and I’m sure that we will find new drugs there.”

Soil microbes are known to compete with one another via antibiotics, but “such processes have rarely been reported for human microbiota,” the authors wrote in their report.

“This is extremely exciting as it provides evidence that a microbial war is ongoing in our body,” Jack Gilbert, a microbial ecologist at the University of Chicago, told Science.