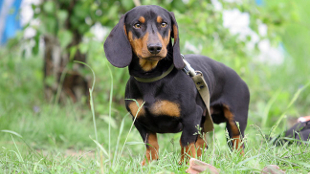 Wikimedia, Anna UtehinaTaking cells from the back of the nasal cavity of pet dogs with spinal injuries and transplanting them into the site of injury restored some movement in most of the 23 animals tested. With the help of a supporting harness, some were even able to walk on a treadmill. Before the surgery, the dogs had no use of their back legs.

“Our findings are extremely exciting because they show for the first time that transplanting these types of cell into a severely damaged spinal cord can bring about significant improvement,” co-author Robin Franklin, a regeneration biologist at the Wellcome Trust-MRC Stem Cell Institute, told BBC News.

The olfactory system is the only part of the body where nerve fibers continue to grow and replicate into adulthood. In particular, olfactory ensheathing cells (OECs), which surround the smell receptor neurons and promote neuron replacement, are being researched as...

The OECs from the dog’s nasal cavity linings were removed and expanded in culture for several weeks, then transplanted back into site of injury in the spine. These dogs were compared with 11 control animals, who received an injection of neutral fluid. Many of the treated dogs began to show significant movement in their previously paralyzed limbs, which the researchers say is a result of regenerated nerve fibers in the damaged region, whereas none of the control dogs improved. (See a video of Jasper, a 10-year-old dachshund, before and after his treatment.)

The researchers are hopeful that the therapy could also be successful in human patients. Early stage trials in humans have suggested that OEC transplants are safe, and the new results, published in the journal Brain, provide hope that they may also be effective. “We're confident that the technique might be able to restore at least a small amount of movement in human patients with spinal cord injuries, but that's a long way from saying they might be able to regain all lost function,” Franklin told the BBC.