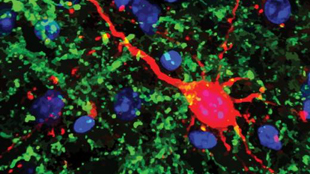 Fibers (in green) link the thalamus to neurons (in red) in the auditory cortex.EMILY PETRUS AND AMAL ISAIAH

Sensory compensation—where other senses become stronger after one is lost—is not uncommon, but the extent to which the brain is capable of this change was unknown. Researchers have found that the brains of mice kept in a completely dark room for a week showed an increase in activity in the part of the brain used to process sound. Their work was published this week (February 5) in Neuron.

“We were quite surprised to see the changes because there is no known anatomical connection that is directly between these two areas,” coauthor Hey-Kyoung Lee of Johns Hopkins University in Baltimore told NPR. “It happened quite rapidly, which I really did not expect.”

The researchers used mice that had passed the critical period for the development of the auditory cortex and...

The authors are hopeful that temporary visual deprivation could help people who receive cochlear implants and have trouble processing the audio information. “This approach potentially might be useful for humans, where the peripheral hearing is fine, but where the central processing of sound stimuli is altered,” coauthor Patrick Kanold of the University of Maryland told Voice of America.