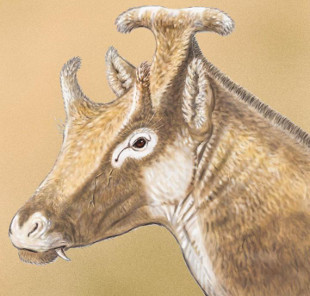 ISRAEL M. SÁNCHEZPalaeomerycids, ancient ruminant animals with three horns, roamed across Eurasia during the middle Miocene Epoch 11-16 million years ago. This week (December 2), researchers from the National Museum of Natural History in Spain published their description of a new palaeomerycid, Xenokeryx amidalae, in PLOS ONE and analyzed a phylogeny for the group that places it with modern giraffes.

The new species is named for the Star Wars character Queen Amidala. Its scientific name means “strange horn of Amidala,” a reference to the largest horn on males, which was “extremely similar to one of the hairstyles that Amidala shows off in Star Wars Episode I when she is the queen of her home planet Naboo,” study coauthor and diehard Star Wars fan Israel Sánchez told Reuters.

X. amidalae was roughly the size of a deer, based on fossils—likely from one adult and two juveniles, according...