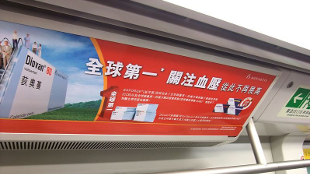 An advert for Diovan in a Hong Kong trainWIKIMEDIA, MK2010Novartis may have supported the work of researchers whose favorable studies of one of the company’s best-selling drugs have been retracted, according to a Japanese newspaper. Novartis has distanced itself from the researchers, but the newspaper reported this week that the company had already invested $1 million in their work, a Nature blog reported.

The blood-pressure drug valsartan (Diovan) was the best-selling drug for Novartis’s Japanese subsidiary in 2011, netting $1.3 billion dollars. That boom followed the publication of studies from Hiroaki Matsubara’s group at the Kyoto Prefectural University of Medicine (KPUM) suggesting that valsartin can also reduce the risk of stroke and heart attack—results that made their way into advertisements for the drug, according to Nature.

But in December 2012, two of Matsubara’s papers on Diovan were retracted by the Japanese Circulation Society for “serious errors in...

Novartis has attempted to play down its links to the research. When asked about a Novartis scientist who coauthored an earlier study on Diovan with Matsubara’s group but was named on the paper as an affiliate of Osaka University, the company said that its employee “merely gave advice on what type of statistical analysis to use.” But earlier this week, The Mainichi newspaper reported that the company had funded Matsubara’s group to the tune of ¥100 million (around $1 million), according to Nature.