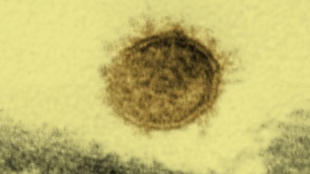 HantavirusIMAGE, NIAIDHantavirus, the dangerous pathogen that can cause hemorrhagic fever and even death in some patients, has a unique mode of entering and infecting cells: it uses cholesterol in the membranes of host cells, according to a study published in mBio on Tuesday (June 30).

“Our work demonstrates that hantaviruses are extremely sensitive to the amount of cholesterol in the membranes of the cells they are trying to infect,” Albert Einstein College of Medicine immunologist Kartik Chandran, said in a statement. “Cholesterol seems to control the ability of hantaviruses to fuse with cell membranes and get inside, into the cytoplasm, which is where all the goodies are to make more virus.”

Chandran and his colleagues found that hantaviruses use multiple human genes involved in cholesterol sensing, production, and regulation to gain entry to the cells they infect. The researchers also found that disrupting a pathway called S1P...

Hantavirus infection usually occurs in rodents, but the animals can pass the pathogen on to humans, sometimes with ruinous effect. No treatment or vaccines treat hantavirus infection, but understanding more about how the virus works may change this. “It is conceivable that cholesterol-lowering drugs could lead to treatments for hantavirus infection,” coauthor John Dye, Jr., of the US Army Medical Research Institute of Infectious Diseases in Maryland said in a statement. “However, such drugs would need to reduce cholesterol levels in key hantavirus target tissues in a human, whereas typical cholesterol-lowering drugs like statins target primarily the liver. It remains to be seen if this can be done safely.”