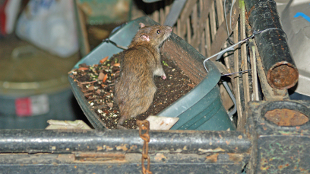 A New York City rat in a flower boxWIKIMEDIA, DAVID SHANKBONEAny New Yorker knows that rats are an almost daily reality of living in the sprawling metropolis. But researchers have uncovered a secret harbored by the ubiquitous rodents; some of New York City’s rats have Oriental rat fleas (Xenopsylla cheopis), which are known to carry plague bacteria (Yersinia pestis) and other pathogens.

A team of entomologists, virologists, and immunologists trapped 133 Norway rats in Manhattan over a 10-month period and recorded the insects, arachnids, and pathogenic bacteria associated with the rodents. About 6,500 parasites were found on the rats, including several mite species, a louse species, and rat fleas. The team, led by investigators in New York, published its results this week (March 2) in the Journal of Medical Entomology. The researchers did find a few different bacterial species from genus Bartonella,...

“If these rats carry fleas that could transmit the plague to people, then the pathogen itself is the only piece missing from the transmission cycle,” Cornell entomologist Matthew Frye, who led the work, said in a press release.

The study follows on findings published this past October, when researchers—including study coauthor Ian Lipkin of Columbia University—found 18 viruses that were new to science lurking within the city’s rats. This is the first time, however, that scientists have found the flea species known to carry plague bacteria in New York City rats.

“Given its global distribution, I am not surprised that the rat flea (Xenopsylla cheopis) was collected, though it was interesting that it was the only species of flea found," Kaylee Byers, an entomologist at the University of British Columbia who didn't participate in the study, told The Verge.

Frye told The Verge that many of the pathogens that rats and their associated parasites carry are easily treated with antibiotics that didn’t exist centuries ago. “We wouldn’t see the Black Death—or the hysteria that comes with it,” he said.