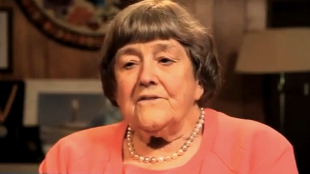 YOUTUBE SCREEN SHOTNASA jet propulsion scientist Yvonne Brill, who won the prestigious National Medal of Technology and Innovation in 2011 and a Distinguished Public Service Medal in 2001 for inventing a jet propulsion system that helped keep communications satellites in their orbits, died last Wednesday (March 27). But The New York Times seemed to feel that her accomplishments as a cook and mother overshadowed her work in science, judging from the first paragraph of her obituary, published in the newspaper’s March 30 edition. The original version of the obit started like this:

“She made a mean beef stroganoff, followed her husband from job to job and took eight years off from work to raise three children. ‘The world’s best mom,’ her son Matthew said.”

This focus on her at-home skills set off a storm of angry tweets from readers after the story ran. Eventually the Times’ public editor Margaret...

Brill was a pioneering figure in the field of rocket science. She died at age 88 in Princeton, New Jersey.