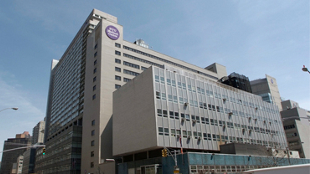 NYU Langone Medical CenterWikimedia, NyulmcwebteamThe New York University Langone Medical Center was among the hardest hit of research institutions along the east coast when super storm Sandy blew through in late October. Thousands of lab rodent and hundreds of biological samples were destroyed as the facility was flooded by a record-setting storm surge and generators failed to power the lab’s freezers and refrigerators. Now, 6 weeks later, researchers are still trying  to get things back in order.

“The damage is truly appalling,” National Institutes of Health Director Francis Collins, who last week (November 30) visited Langone and met with NYU leadership, wrote on his blog. “The infrastructure has been essentially obliterated.”

Associate professor Stuart Brown, head of the research computing and bioinformatics at the lab, talks in his blog about the devastating events. The informatics group's computing cluster, located in a sub-basement of the building, was “flooded...

With the help of other labs in the area, however, including the New York Genome Center and Memorial Sloan Kettering, Brown wrote, NYU researchers are able to push forward with their sequencing experiments. They were able to salvage 200 terabytes of backup sequencing data, and have set up temporary data storage in a New Jersey facility, using computing power from the NYU Center for Genomics and Systems Biology and the Amazon cloud.

“My challenge is trying to organize the flow of data from the labs back to the investigators,” Brown wrote, though it’s not an easy task. “It is starting to feel like we are juggling elephants.”

To help researchers cope with the long recovery process, Collins and NIH Deputy Director for Extramural Research Sally Rockey “promised to use all available tools from NIH to help,” Collins wrote on his blog, including “altering submission deadlines for grant applications, allowing researchers to negotiate new specific aims, and extending training periods for trainees whose research projects have been seriously affected.” He also noted that the agency will soon offer additional funding for NYU researchers who have lost equipment or supplies. “While the road ahead is long,” Collins wrote, “there is no doubt from what we saw on Friday that the scientists at NYU are determined and resilient.”