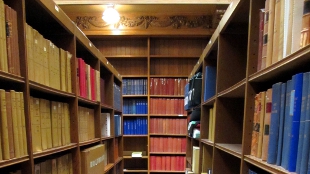 WIKIMEDIA, LOOZRBOYOpen-access advocates rejoiced this past February when John Holdren, director of the White House’s Office of Science and Technology Policy (OSTP), issued a memo stating that all federal agencies funding scientific research must make those papers freely available to the public within 1 year of publication in a journal. But how to implement such a sweeping plan, which called for federal science agencies to find a system for making published, taxpayer-funded research open access by August 22? Well, a consortium of scientific publishers thinks it has the solution, and its plan circumvents the need for each agency to construct and manage a full text database modeled on the National Institutes of Health’s PubMed Central.

The project is called the Clearinghouse for the Open Research of the United States (CHORUS), and it’s being organized in part by commercial and nonprofit journals that belong to the Association of American Publishers,...

In CHORUS’s opening notes, publishers have started to index papers supported by funding from federal agencies in a brand new database called FundRef, which is in beta.

Fred Dylla, executive director of the American Institute of Physics—which publishes Applied Physics Letters, Biomicrofluidics, and other titles—told ScienceInsider that CHORUS could save the government money (PubMed Central costs NIH about $3.5 million a year where the total cost of FundRef will be about $1 million, which will be paid by participating publishers) in this time of budgetary belt-tightening. “We’re anxious for agencies not to spend their precious research funds on the OSTP directive,” he said. “We’d rather they spend that money on research.”

But Heather Joseph, executive director of the open-access-advocacy organization the Scholarly Publishing and Academic Resources Coalition, told ScienceInsider that she was not yet convinced that CHORUS is the best possible solution, especially with regard to providing access to full-text articles. “That’s also why I am keen on seeing federal databases play a role in any solution,” she said.

Correction (June 6): The original version of this article incorrectly named the publishing trade group that supports CHORUS. The mistake has been corrected, and The Scientist regrets the error.