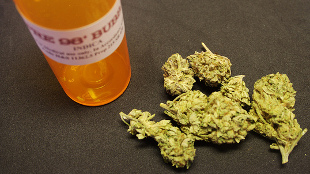 Studying the health effects of marijuana just got a little easier. In a statement released last week (June 23), The Department of Health and Human Services (HHS) announced the elimination of one of four regulatory hurdles that researchers must clear in order to study medical applications for the drug.

“The president has often said that drug policy should be dictated by unimpeded science instead of ideology, and it’s great to see the Obama administration finally starting to take some real action to back that up,” Tom Angell of the pro-legalization group, Marijuana Majority told the Washington Post.

According to the Washington Post, HHS determined that the regulatory step, which entailed a review by Public Health Services (PHS) was redundant with another required review by the Food and Drug Administration. Drug Policy News reports that the Clinton administration installed the PHS review to keep the growing field of...

“I think it's a sensible change; but people are being delusional if they think this will result in a flood of research on the drug,” Kevin Sabet of the anti-legalization group, Smart Approaches to Marijuana, told the Washington Post.

Marijuana researchers still face other unique barriers, such as the requirement to obtain all marijuana plants from the National Institute on Drug Abuse (NIDA).