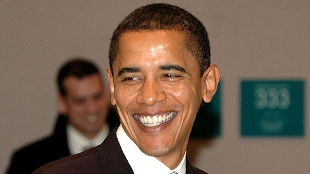 WIKIMEDIAIn a speech at the National Academy of Sciences (NAS) annual meeting this week (April 29), President Obama restated his support for research funding and his trust in the peer-review system, which has come under attack in recent weeks.

“With the pace of technological innovation today, we can't afford to stand still for a year or 2 years or 3 years,” Obama said, according to an NAS press release.

The comments come in response to a recent barrage of questions from republican leaders in Congress regarding the validity of specific grants and the peer-review process in general. Most recently, Republican Representative Lamar Smith from Texas, chairman of the Science, Space, and Technology Committee, circulated a proposal that suggested grants approved by the NSF should be certified by the agency director as advancing “national health, prosperity, or welfare, and to secure the national defense,” among other requirements.

But Obama’s speech wasn’t focused exclusively on politics. Some time was spent lauding the work of researchers and the NAS, as well throwing in a few zingers: “[P]art of what's made the Academy so effective is that all the scientists elected to your elite ranks are volunteers,” he said, according to ScienceInsider. “Which is fortunate because we have no money anyway.”