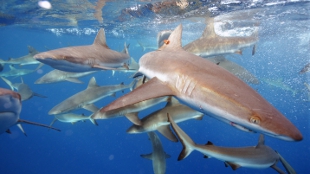 The grey reef shark (Carcharhinus amblyrhynchos), is but one of the many marine species that call the Pacific Remote Islands Marine National Monument home.WIKIMEDIA, USFWS - KYDD POLLOCKThe Pacific Remote Islands Marine National Monument (PRIMNM), an area that encompasses several US-controlled coral atolls west of Hawaii, just got a lot bigger. President Barrack Obama announced Thursday (September 25) that he will expand the reserve from its current area of 83,000 square miles to a whopping 490,000, making it the largest marine protected area on Earth. Commercial fishing, dumping, and mining will be prohibited in the area, which is three times the size of California, though recreational fishing and boating will be allowed with the proper permits. “What has happened is extraordinary,” Elliott Norse, founder and chief scientist of the Seattle-based Marine Conservation Institute, told National Geographic. “It is history making. There is a lot of...

The virgin swath of sea, islands, and sea mounts is home to deep-sea coral, several species of endangered sea turtle, manta rays, and other imperiled species, but is vulnerable to illegal fishing operations as well as other disturbances. “The president acted expeditiously, while the area is still largely pristine and undisturbed,” Frances Beinecke, president of the Natural Resources Defense Council, told the Associated Press.

Obama announced plans to expand PRIMNM this June, stating he would use his “authority as president to protect some of our nation’s most pristine marine monuments, just like we do on land.” That initial plan would have expanded the area to 586,400 square miles. But after a public comment period that gathered opinions from conservationists, researchers, fishing and cannery groups, the measure stalled in Congress, along with several other conservation initiatives. So Obama bypassed Congress by using the Antiquities Act of 1906, which was designed to give presidents the authority to issue executive orders to protect public land.