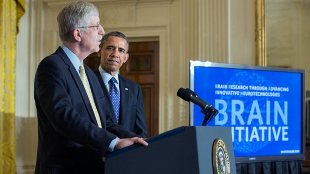 Known as Brain Research through Advancing Innovative Neurotechnologies (BRAIN), the initiative is designed to have the same transformative effect on brain research—and on our understanding of various brain diseases—as the Human Genome Project did for genetics research. It will begin next year, led by three government agencies: the National Institutes of Health (NIH), The Defense Advanced Research Projects Agency (Darpa) and the National Science Foundation (NSF). A working group at the NIH—headed by Cornelia Bargmann of The Rockefeller University and William Newsome of...

Private institutions, including the Allen Institute for Brain Science, the Howard Hughes Medical Institute, the Kavli Foundation, and the Salk Institute for Biology, will also contribute.

Supporters of the project argue that it will spur greater private investment in science and technology, and potentially provide a significant boost for the US economy. “It makes sense to have a brain activity map now because the maturation of an array of nanotechnologies can be brought to bear on the problem,” Michael Roukes, a physicist at the California Institute of Technology, told the NYT.

But some scientists are critical of the plans. David Stein, a neuroscientist at Emory University in Atlanta, told the NYT that developing the technologies first is the wrong approach. “I think the monies could be better spent by first figuring out what needs to be measured and then figuring out the most appropriate means to measure them,” he said. “In my mind, the technology ought to follow the concepts rather than the other way around.”

See an infographic from the White House about the project.