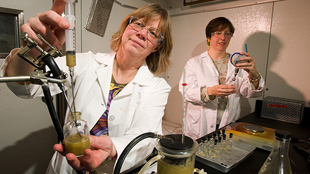 Yesterday (April 26), the White House released its “Bioeconomy Blueprint,” a strategy to spur the development of biological products in the United States, including medical treatments, crops, biofuels, and more.

“The bioeconomy has emerged as an Obama Administration priority because of its tremendous potential for growth as well as the many other societal benefits it offers,” said the document’s executive summary. The country’s current bioeconomy is centered on genetic engineering, DNA sequencing, and automated high-throughput manipulations of biomolecules, the report cited. Emerging technologies, it continued, include synthetic biology, proteomics, and bioinformatics.

Initial reactions from the biotech industry are positive. “Replacing chemistry with biology—fossil fuels with biofuels—puts steel in the ground, creates jobs, and powers our economy,” Adam Monroe, president of Denmark-based biotech Novozymes, told Biofuels Digest. "The plan includes good ideas that are consistent with policies...

The plan includes prioritizing R&D for high-risk/high-reward research; increasing commitment to translational research by, for example, calling upon funding agencies to support entrepreneurship; reforming the regulation process to reduce the amount of red tape between products and the market; preparing a scientifically trained workforce; and providing incentives for public-private partnerships.

Yet much of the report includes lists of government programs that are already underway, The New York Times reported, so it is unclear what, if any, changes will come from it.