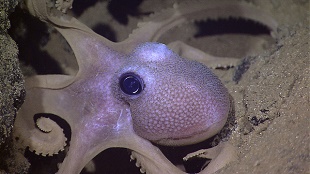 FLICKR, NOAAInspired by octopuses, researchers have created sheets of sensors with a temperature-sensitive dye to mimic cephalopod camouflage. The sensor-laden sheets, described this week (August 18) in PNAS, used the animals’ biology of blending into backgrounds to automatically sense and adapt to their environments without any external user input.

Cephalopod skins use a three-layered system for quick camouflage: A top layer of pigmented chromatophores change color in response to signals from underlying muscles and nerves, a middle layer of light-reflecting cells can be turned on and off within seconds, and a bottom layer of white cells, which provide a bright backdrop to control the contrast of patterns. Octopus skin also contains photosensitive cells that detect light and patterns without relying on feedback from the eyes or brain.

To imitate this architecture, John Rogers of the University of Illinois at Urbana-Champaign and his colleagues devised an array of small,...

“There are analogies between layers of our system and those in the cephalopod skin, but all the actual function is achieved in radically different ways,” Rogers told National Geographic’s Not Exactly Rocket Science. “The multi-layer architecture works really well, though. Evolution reached the same conclusion.”

When the photodiodes sensed incoming light, they triggered the muscle-mimicking diodes to heat up the dye. Within seconds, the dye switched from black to colorless to reveal the white layer below, thus enabling quick-changing patterns of black and white.

“Real cephalopods are capable of levels of active camouflage orders of magnitude more sophisticated than our system,” Rogers told Popular Mechanics. “But we hope to eventually design manmade systems that rival those we see in biology.”

This adaptive optoelectronic camouflage “provides realistic routes to thin sheets that can be wrapped onto solid objects to modulate their visual appearance, with potential relevance to consumer, industrial, and military applications,” the authors wrote in their paper.