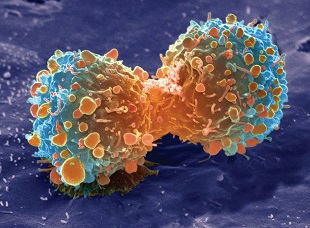 Lung cancer cell dividingWIKIMEDIA, NIHResearchers have developed a new system to observe cancer cells in a capillary-like environment, according to a study published earlier this month (June 6) in ACS Nano. The environment, made from a rolled-up nanomembrane, is transparent, easy to replicate, and cylindrical—in contrast to previously used 2–D petri dish environments or channels with square cross-sections.

The setup moves toward “an appreciation for what it’s like to be a cell in a body,” molecular cell biologist Buzz Baum of University College London who was not involved in the work told Science News.

Observing human cancer cells dividing within these tubes, a team led by researchers at the Leibniz Institute for Solid State and Materials Research in Dresden, Germany, found that the morphology and dynamics of structures such as the mitotic spindle and the cellular cortex failed to form properly when cells were constrained....

Confinement in tubes also slowed mitosis and favored asymmetrical cell division, resulting in an uneven distribution of chromosomes in daughter cells. Study coauthor Christine Schmidt of the University of Cambridge, U.K., told Science News that this and other findings from capillary-like environments could eventually inform the development of therapies to target cancer cells as they spread through the vascular system, while leaving healthy cells undamaged.