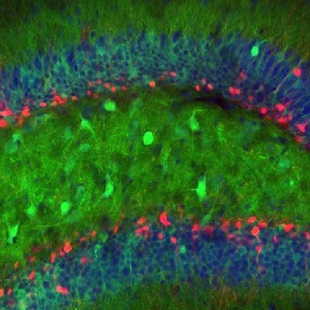 Newly generated (red) and mature (green) granule cells in the dentate gyrus region of a mouse brain.NATHAN DANIELSON/COLUMBIA UNIVERSITY'S ZUCKERMAN INSTITUTEAlthough most neurons are generated during development, some brain regions, such as the dentate gyrus region of the hippocampus, continue replacing neurons into adulthood. The function of new cells in this region has so far been unclear, primarily due to their inaccessibility in living animals. Now, using a combination of imaging techniques to observe neural activity in awake mice, researchers at Columbia University have elucidated a role for these new brain cells in learning and memory. The findings were published last week (March 10) in Neuron.

“Other studies had been unable to image the dentate gyrus, let alone the individual cells that reside within it, at this level of detail,” study coauthor Mazen Kheirbek of Columbia said in a statement. “Here, we were...

Using calcium imaging and a miniature microscope implanted into the brains of live mice, the researchers found that new neurons exhibited a burst of excitability after genesis. To probe the role of this heightened activity in memory, the team exposed the animals to various cue pairings. A particular scent might be paired with a flashing light, for example, while a tone might signify an electric shock. As expected, mice learned to ignore cues signaling a neutral outcome, but responded fearfully to cues associated with the shock.

But when the team exposed mice with newly formed granule cells silenced by optogenetics to the same pairings, the animals were unable to distinguish associations, and responded fearfully to all cues. “The finding suggests that newborn cells do something important and special in memory processing that allows animals to tell apart and separate memories,” study coauthor Attila Losonczy of Columbia told New Scientist.

Michael Drew of the University of Texas at Austin told New Scientist that the research was “impressive because it requires pulling off several delicate maneuvers simultaneously.” Drew, who was not involved in the research, added that because impairments in adult neurogenesis are associated with schizophrenia and other disorders, the findings could have therapeutic implications. “This paper gives us some tantalizing observations and sets the stage for many more experiments,” he told New Scientist.