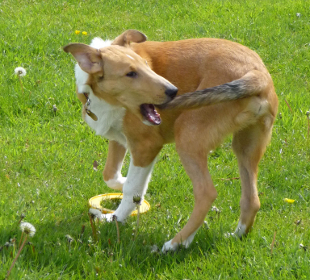 FLICKR, LIL SHEPHERDDog obsessive compulsive disorder (OCD) manifests itself in a variety of telltale behaviors—incessant tail chasing and chewing, to name a couple. Doberman Pinschers, bullterriers, Shetland sheepdogs, and German shepherds all have relatively high rates of the anxiety disorder. Now, examining the genomes of Dobermans, researchers have identified four genes connected to the disorder in dogs, possibly leading clues for what to look for in the human genome. The work was published in Genome Biology this week (February 16).

Comparing portions of 90 genomes of Dobermans suffering from OCD with 60 healthy Dobermans, Elinor Karlsson from the Broad Institute and Harvard University and her colleagues noted several key differences. Scanning the genomes of bullterriers, Shetland sheepdogs, and German shepherds, the researchers narrowed the field down to four genes with high rates of mutations in dogs that tend to exhibit OCD behaviors.

“This is really exciting because psychiatric diseases...

Indeed, finding an effective treatment for OCD is a great medical need, as current therapies, which typically involve antidepressant medications, only help about 50 percent of patients, both human and canine. Karlsson and her colleagues proposed that if the genes identified in OCD dogs can be linked to pathways involved in human OCD, the dogs may serve as a good model for the disorder.

The new study is “another hard-won rung of the ladder toward unraveling the OCD mystery,” Janice Kloer-Matznick, an animal behaviorist and dog-origins researcher in Central Point, Oregon, told Discovery. Of course, she added, there’s “no single smoking gun.”