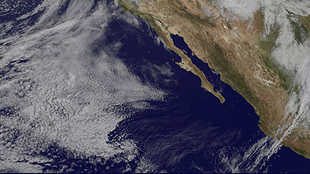 FLICKR, NASA GODDARD PHOTO AND VIDEOExtra carbon dioxide in the atmosphere leads to ocean acidification, as the greenhouse gas interacts with water to form carbonic acid. But the chain of events does not stop there, according to a study published earlier this week (August 25) in Nature Climate Change. Ocean acidification may lead to decreased cloud formation and worsen global warming over time.

“Our results indicate that ocean acidi?cation has the potential to exacerbate anthropogenic warming through a mechanism that is not considered at present in projections of future climate change,” the study’s authors wrote.

Sulfuric acid seeds cloud formation. The majority of sulfur in the atmosphere is emitted from the ocean, often in the form of dimethylsulfide (DMS) produced by phytoplankton. But mesocosm experiments have shown that in acidified ocean water, phytoplankton produce less DMS. This reduction of sulfur may lead to decreased cloud formation, raising global...

However, Michael Steinke, who studies marine sciences at the University of Essex, told Nature News that according to his research, DMS production rises in warmer waters, which could counteract DMS decreases due to acidification.

At any rate, ocean acidification is set to alter marine biodiversity, another recent Nature Climate Change report confirms. "Our study showed that all animal groups we considered are affected negatively by higher carbon dioxide concentrations,” Astrid Wittmann, a coauthor of the paper from the Alfred Wegener Institute, said in a press release. “Corals, echinoderms, and mollusks above all react very sensitively to a decline in the pH value.”