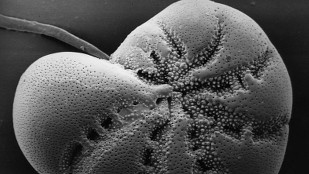 A marine microfossil from the Foraminifera phylumWIKIMEDIA, HANS GROBE/AWIBy sequencing DNA recovered from deep-sea sediments in the South Atlantic, researchers have discovered previously unknown marine microorganisms that lived up to 32,500 years ago. The findings, published this week (May 8) in Current Biology, suggest that genetic material recovered from sea floor sediments can shed light on the ecological history of the oceans and climate change.

A team of scientists from several European countries took cores of mud from the abyssal plains in the middle of the South Atlantic, a barren patch of ocean floor 5,000 meters below the surface. When they sequenced DNA from the samples and compared the results with known sequences from Foraminifera and Radiolaria—two groups of marine microorganisms well represented in the microfossil record as well as living taxa—the researchers identified 169 Foraminifera species and 21 Radiolaria, many of which were unknown. Furthermore, a...

The results show that it’s possible to study species not contained in the fossil record, which could bring new insights into ocean history and climate change, study author Jan Pawlowski of the University of Geneva in Switzerland, told ScienceNOW. For example, different species prefer different water temperatures, so researchers may be able to use ancient DNA from sediments to track the abundance of different species over time and reveal changes in ocean temperature.

As reported in another paper out this week (May 6) in the Proceedings of the National Academy of Sciences, a separate team sequenced ancient DNA from sediments taken from the 980-meter-deep floor of the Black Sea, which was a once vast lake before it became connected to the Mediterranean Sea around 9,000 years ago. The scientists found evidence of 2,700 species, including green algae, fungi, and dinoflagellates.

They were then able to track the fate of some species over time, as their DNA came and went from sediment layers, and discovered that one type of marine fungus appeared roughly 9,600 years ago—at the same time as some freshwater plankton and mussels disappeared—suggesting that sea water may have intruded into the lake earlier than had been assumed.