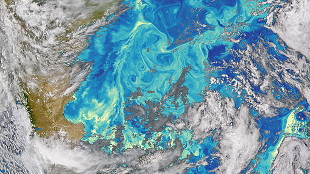 Scientists have identified a natural laboratory in which they can study the relationship between atmospheric aerosols and cloud cover. In the Southern Ocean, far from man-made particulates and aerosols, researchers have been able to appreciate the effects of ocean microbes on the region’s notoriously cloudy skies. In a study published in Science Advances last week (July 17), researchers reported evidence to suggest that particles produced by bacteria and plankton near the surface of the Southern Ocean can seed cloud droplets in the atmosphere.

“Life in the ocean directly influences the brightness of clouds,” study coauthor Dennis Hartmann, an atmospheric scientist at the University of Washington, told Scientific American.

Hartmann and his colleagues used satellite imaging and spectroscopy data to estimate the density of droplets within clouds over the Southern Ocean, as well as the clouds’ reflectiveness, which increases with droplet density. They found that both correlated...

Although the researchers couldn’t draw a causal link between cloud cover and brightness and biological aerosols, coauthor Susannah Burrows, an atmospheric scientist at the Pacific Northwest National Laboratory, told Scientific American that “higher cloud droplet numbers occur over phytoplankton blooms, and we currently are unable to explain this phenomenon without invoking an increase in the [aerosols] near these blooms.”

The Southern Ocean may prove to be a useful system for studying how anthropogenic aerosols influence clouds and weather. Coauthor Daniel McCoy, a PhD student in atmospheric sciences at the University of Washington, told Live Science that his team’s finding “helps us have a better idea of what [factors] the climate change prediction should be including.”