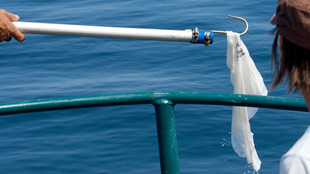 The large amounts of plastic debris that have been accumulating in the north Pacific Ocean for decades may be altering the resident ecosystems in unexpected ways. According to a new study published in Biology Letters this week (May 8), open sea insects that lay eggs on solid substrates are increasingly using tiny plastic particles less than 5 millimeters in diameter for this purpose.

Insects such as Halobates sericeus, which normally lay their eggs on the rare piece of drift wood or pumice, are benefiting from the increased surface area the plastic debris is providing, and are laying more eggs. Indeed, over the past 4 decades, the number of plastic particles that have drifted into the Great Pacific Garbage Patch, brief description, has increased by about 100 times.

While researchers are uncertain of the wider impact of this increase in egg-laying, it is likely to have an immediate...

The authors also worry that a boom in insect populations may deplete the plankton populations that they feed on, but conclude that further research is needed in order to understand widespread ecological effects.