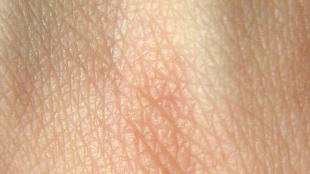 WIKIMEDIA, XENONRMelanoma cells give off a signature combination of gaseous chemicals that could be used as a biomarker for the early detection of the disease in human skin, according to a study published last week (June 14) in the Journal of Chromatography B.

Human skin releases chemicals called volatile organic compounds (VOCs), many of which are odorous. It has been demonstrated that melanoma cells emit VOCs that differ from those of normal skin cells—a finding supported by studies showing that dogs can use their keen sense of smell to identify skin cancer. But it was not clear which VOCs distinguish melanoma from healthy skin cells.

To find out, George Preti of the Monell Chemical Senses Center and colleagues at the University of Pennsylvania (UPenn), both in Philadelphia, collected compounds from sealed containers containing cultured melanoma cells at three different stages of development. The researchers then used gas chromatography-mass...

They found that both the types and concentrations of molecules differed between diseased and healthy cultures, and identified a unique chemical signature associated with melanoma cells. Furthermore, they noticed that skin cancer cells at different stages of progression also had VOC profiles that distinguished them from one another.

Preti and his colleagues also successfully detected the different VOCs with a single-stranded DNA-coated nanotube sensor, which the authors suggest could form the basis of a portable screening device. “We are excited to see that the DNA-carbon nanotube vapor sensor concept has potential for use as a diagnostic,” said study coauthor A.T. Charlie Johnson, whose lab at UPenn developed the nanosensor, in a press release. “Our plan is to move forward with research into skin cancer and other diseases.”