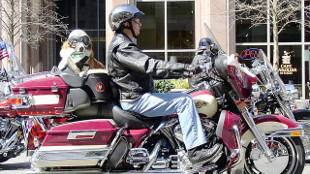 The DNA of a wolf rib fragment collected in the Taimyr Peninsula in northern Siberia is posing a challenge to the current timeline of mankind’s relationship with dogs. Previous work placed the domestication of canines only as far back as 16,000 years ago. But the 35,000 year-old Taimyr wolf genome, published in Current Biology last week (May 21), tells a different story.

When researchers in Sweden and the U.S. compared the newly assembled genome to those of modern wolves and dogs, they found the Taimyr wolf equally related to both, and that it likely split off from its modern counterparts around the same time. The researchers’ analysis and the age of the rib fragment places that divergence well before the commonly accepted timeframe for the emergence of domesticated dogs.

“Dogs may have been domesticated much earlier than is generally believed,” coauthor Love Dalén, a paleogeneticist at the Swedish...

The team also found that comparing the Taimyr wolf genome to a modern Chinese wolf genome using the currently used genetic mutation rate for wolves dated the divergence to only 10,000 to14,000 years ago. Because this date range is incompatible with the radiocarbon dating of the rib, the authors concluded that the wolf mutation rate, generation time, or both might be slower than previously thought.

“The most significant finding is the recalibration of the [rate of mutation] time scale and that opens up the possibility of an earlier domestication,” coauthor Pontus Skoglund, a geneticist at Harvard University told the Christian Science Monitor.

The findings, however, don’t definitively show that domestication occurred at the same time as the reported genetic divergence. “We do not yet know whether it infers an early divergence between two wolf populations or between wolves and dogs,” Laurent Frantz, an evolutionary biologist and geneticist at the University of Oxford told New Scientist.