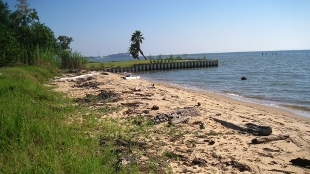 More than 2 years following the largest oil spill the Gulf of Mexico has ever seen, scientists are still discovering consequences on the surrounding ecosystems. Most recently, researchers at the University of New Hampshire’s Hubbard Center for Genome Studies (HCGS) and colleagues found that microbial communities in the marine sediments around the Gulf changed significantly as a result of the disaster, according to the study published this week (June 6) in PLoS ONE.

The researchers sampled five shore sites, near Dauphin Island, Alabama, and Grand Isle, Louisiana, at two time points—just after the spill began (before oil had reached the beaches) and again in September 2010. “In that short time period, we saw a drastic change in the microbial community,” lead author Holly Bik, then a postdoc at HCGS, said in a press release. “We were shocked.”...

The team found that the microbial eukaryote communities, once dominated by nematodes, as most beaches are, shifted to being comprised predominately of fungi—specifically, fungi with an appetite for oil. That is, the fungi are believed to utilize the hydrocarbons found in oil, thriving in such hostile, polluted environments.

The authors suspect that these changes in the microbial makeup of the beaches along the Gulf will impact other marine and short animals as well. Microbes “underpin the entire ecosystem,” said Bik, now at the Genome Center at the University of California, Davis. “If you knock out the base of the food pyramid, you’re not going to have food higher up in the food chain.”